How to take care of careless players.

This is a game of mine from the first round of the 2007 New Mexico Collegiate Championship where my opponent, a 1604 USCF rated player, played without much care or respect for both the board and myself. I hope you learn something from this simple, yet necessary chess lesson. 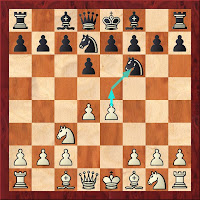 This is territory I was not used to. I have never played this opening sequence before but I was prepared for anything. It's obvious with Black's last move that his intention is to push e5 on his next move. I had to think of the real consequences of this move but I welcomed it.

4.Nf3 e5 5.dxe5 dxe5 6.Bg5 Be7 7.Bc4 0-0 8.0-0 h6 9.Bh4 Nxe4?! (diagram 2)
The game seemed to have normal developing moves until this move. Black thinks he is winning a pawn but he is not following several rules of chess strategy. He's opening up lines and as a general rule, the player with the best development benefits most from open lines. Compare both players pieces here for a moment. White's pieces are all placed for attack whereas Black's are cramped and passive. I thought real hard on how to continue from here and came up with a clever way to punish his careless play. 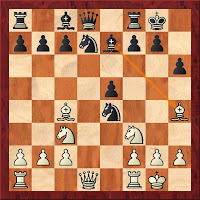 10.Bxe7 Nxc3 11.Bxd8 Nxd1 12.Raxd1!
It would have been a waste of a move to capture the black knight with the rook on f1. My point was to use both the d- and e-files for my rooks, taking complete advantage of having open lines for my pieces.

12. ...Rxd8
What is the best continuation for White here? Remember, we're taking advantage of the fact that all the open lines are used to White's advantage in this position. 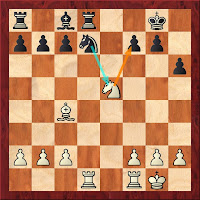 After this move, my opponent looked bewildered and knew almost instantly that he had screwed up. From the position, it seems as if both players are even now that White has regained his pawn, but one must look at the quality of the pieces. White's pieces are dominating the board whereas his couterparts are sitting back in a very passive state. White has major advantages here due to Black's blunder on move 9.

13. ...Kf8?
Obviously the Black King is desperate to save the lonely pawn on f7 but he loses 'time' making such a move. Not to mention, it allows White to gain a tempo by bringing more pieces into the attack. Better for Black possibly would have been 13. ...b6! This move serves many purposes: it activates his Bishop and also now threatens to take the Knight on e5.

14.Rfe1!
It is now clear who's winning this game. I hate to sound cocky but I feel proud of myself for actually coming up with such a position against a decent tournament player who's been playing for many years. All of White's pieces are active and directly attacking Black's king. 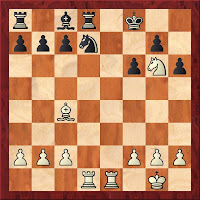 14. ...f6??
In my calculations, I considered him making this move... and me making the obvious reply which instantly wins the game. But never in my right mind did I actually think he would play it. This position now belongs in one of those "1001 Winning Combinations" kind of books under "Mate-in-One".

After I showed the game to a few fellow chess players at the local club, they asked me to analyze the game and here you have my analysis. I know there's a hint of arrogance in my analysis but I feel that's the only way for me to succeed at this point. I try to make myself feel like the player losing, thus drilling the lessons in my mind forever in hopes that I will never make such mistakes.

1) Develop all your pieces before you go 'pawn snatching'
2) Don't open up lines if you are lacking in development. Open lines only aide those who have superior development.
3) Improve the position of your worst place piece. In the previous game, Black should have improved his Bishop on c8 for fighting chances.

After the 4th move by black this is a Philidor Defence, Hanham variation.

ah thanks! it's nice to finally be able to put a name to that opening. perhaps i'll do some research on it and maybe play it in the future.

Also take a look at:
http://www.vanrekom.nl/thelion/indexgb.htm