As you have read from my previous posting, I have been pondering the switch from 1.d4 to 1.e4 for the sake of creating wild attacking possibilities. To those who have commented, I thank you and I have taken to heart every word spoken. I agree that 1.d4 seems easier and a little lighter to study but for some odd reason something in my brain wants to push to do things the hard way. Here is my first adventure in the 1.e4 world in months using an opening line I've never used before. 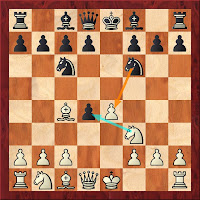 This is a line of the Scotch I have never played before. I always used to just play 4.Nxd4 and hope things went my way from there but I've been studying some games from the 19th century and saw so many possibilities with this variation. I'm not normally a gambit player but I figured since my opponent was much stronger than me he would beat me either way. So I put theory aside for a moment and gave myself a scare with this gambit. 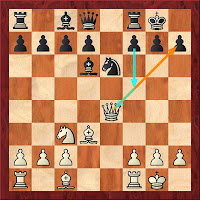 This move was brilliant in my eyes for the fact that I knew that it would cause Black to push one of his kingside pawns, thus committing to long term weaknesses of the dark squares.

10...g6 11.Bh6!
Gaining tempo while developing the dark squared Bishop. Black has real problems on his Kingside due to a majorly cramped position and lack of development. 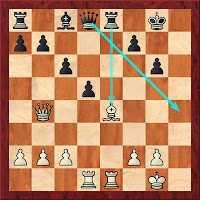 Pins galore! White finishes his development with yet another pseudo-tempo move. To those who don't know why this is a good move, it's pretty obvious that Black can't take the Bishop with the pawn, for he will lose his Queen.

23...b5 24.Kg2 a5 25.Qd4!
Second step on my to-do list. Though black has an impressive pawn chain and center, white is keeping an eye on h8 and h1 for his two remaining major pieces. Black decides to disregard White's plans on the Kingside.

25...Qd7? 26.Rh1! f6
Suddenly Black see's White's plan and does what he can to stop it. The game was over at this point; defense would have been extremely difficult. 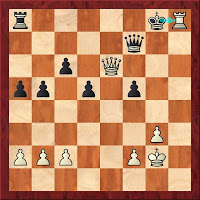 
It was very interesting for me to have such a victory with not just an opening I've never played before, but also with the fact that I defeated a player who is much stronger than myself. I will take with me a few lessons from this game. One of them being that I remembered how FUN chess was when I wasn't so worried about beating my opponent. I really underestimated myself right out of the opening in this game, yet I managed to not only beat him in the opening, but also the middlegame and endgame.

So to answer my own question: I'm going to give 1.e4 a try. If it turns out that it hurts my game, rather than improve it, well it's a lesson well learned. We all have to make mistakes to improve, and we can't make mistakes without taking risks. My next tournament isn't until the very end of March and I look forward to it more than anything right now.

Once again, thanks for all the suggestions from the last post. I'll continue to play 1.d4 when I'm not feeling confident against certain opponents.

You Played Brilliant! =]
I'm blogging a victory too, take a look!
And congratulations one more time! =]

a beautiful ending. I played around a little with it in Fritz I think that black had some chances here .

What is your user name on playchess ? I play there as Takchess

Takchess - I agree, I finally ran the game through Fritz this morning and well.. Turns out my analysis was pretty inaccurate throughout the game. Black blundered a few times in the opening, but I blundered as well, allowing him to gain equality and maybe even an advantage. Fortunately for me, he didn't see his opportunities :). As far as playchess, I don't have an account there. I do have an account on FICS though, it's SirNemo.

I did the switch a while back as well becasue my brain was aching for some 1.e4 action.

1.D4 tends to be mroe positional and easier to manage from a preparation point of view. My main motive to switch to 1.e4 was that I did a lot of tactics and wanted toexplore those options.

THis lead to gambit style games as a short circuit to learning the various responses to this openign. You see 1.e4 kind of gives the power back to your opponent to decide the type of game. Then its up to you to try and trip him up.

I play the Skotch as well and liek it for the thematic target of f7. Likewise I found the Smith -morra a nice remedy for my fear against teh sicillian... as it had similar tactical shots.

For Frencha and Caro-Kann players... I didn't mind takign the more positional route since I was already a positional player.

I am now coming back to 1.d4 as a mix in my opening preparation.

Good luck in your journey.

The Scotch is a good choice, I think Nd4 is stronger, look to games of Kasparov for the main ideas, there's really not that much theory to learn. Less options than you may think.

Blunderchess - I still keep 1.d4 an option for me. I know people tell me it's very positional, but for some odd reason I really enjoy those positions because I seem to know exactly how to open them up to my likings (hence the game from two posts ago). Something is still irking me to play 1.e4 and thus far I've had nothing but success with it. Granted, I have lost more games than I've won so far. However, the games I have won are beautiful in my eyes.

DrunkNKnight - Thank you, I will definitely look up some of Kasparov's games in the Scotch. I didn't know he played the Scotch so this makes me extremely excited. I know I'm not a 1000 rated player for the fact that I'm consistently beating much higher rated players in casual play (like my last game). When it comes down to rated games however, they all seem to play much stronger. My rating is so low because, well, I lost my first rated game to an 1190 player in time trouble, which took my rating from Unrated to 793. I won my second rated game against an 800 and now my rating is 980. I hope to up this rating by significant margins soon.

980 (p2) indicating you'd played two rated games only? This is why they call it a provisional rating.

As a side note Nakamura just played your 4.Bc4 today in a game that he no doubt really wants to win.

LEP - I know 980(p2) isn't much. Actually it's a HUGE disappointment to me that I actually lost to an 1190 USCF player in a rated game. I should have payed more attention to my clock haha. The sucky thing about living in New Mexico is that there's very little tournaments here. I wish I lived in NYC haha.

DrunkNKnight - Really?! Where did you find this? I wanna see it!

I noticed the game on Susan Polgar's blog but you can also go to the Gibraltar Chess site or hikarunakamura.com where he should have some commentary up soon as he just started this blog and he seems excited about it.

Wow thanks for that! It was a pretty good game. Although Black was better in the endgame, he blundered a lot. There was no reason for him to lose his two extra pawns. Oh well. Nice victory fir Nakamura!